The Mars Orbiter Mission (MOM) would be launched at 2.36 pm on November 5 aboard PSLV-C25 from the Satish Dhawan Space Centre in Sriharikota, Andhra Pradesh, the Indian Space Research Organisation (ISRO) said Tuesday. The decision was taken following a meeting of ISRO officials earlier in the day. 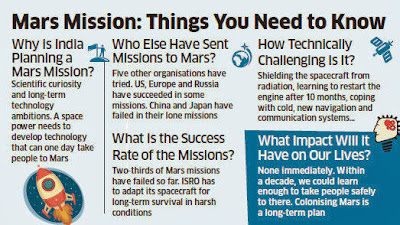 The MOM was to originally launch on October 28 but the ISRO deferred it on October 19 after Nalanda, one of the two Shipping Corporation of India ships that will track the PSLV, failed to reach its specified location near the Fiji Islands due to poor weather in the South Pacific Ocean.

The ships-Yamuna and Nalanda-are now positioned in the South Pacific Ocean. The ISRO has set an October 28 to November 19 window for the launch. These are the days when Mars would be closest to earth, an occurrence that will repeat only after 780 days. 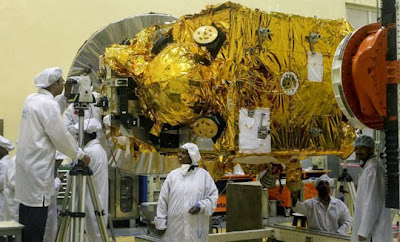 NASA is incidentally set to launch its latest Mars orbiter Maven on November 18.
ISRO officials said PSLV-C25 and the spacecraft carrying the 15-kg Mars Orbiter were in good health. "The integration of the spacecraft with the launcher PSLV-C25 is completed and the heat shield closure activity is also completed," ISRO director of publicity D P Karnik said.

The preparations now move towards fuelling of the launch vehicle and final checks.


Work done at ISRO centres around the country on the 1,343-kg spacecraft, the workhorse PSLV and five science instruments on the mission converged at Sriharikota on October 3 to bring the Rs 450-crore Mangalyaan Mission into its final stages.
Posted by Ohm Jal at 11:01 PM 3 comments:

A film to be made on ISRO scientists 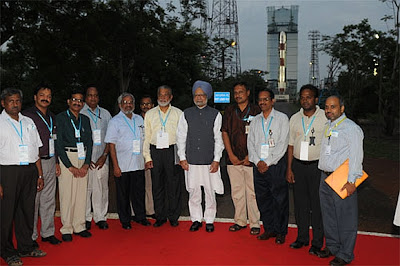 A film is going to be made on ISRO scientists and actor tuned director ISRO scientists is going to helm this film. He is going to portray “unforgettable human stories” through his films and his new venture will see him document the “shocking and moving” tale of ISRO scientist Nambi Narayanan. Versatile actor and Malayalam superstar Mohanlal will act in lead role in the film.
Posted by Ohm Jal at 2:16 AM 73 comments:

NASA's Mars Curiosity Rover, expected to land on the Red planet in three weeks, is NASA's most advanced robotic mission yet.
The Curiosity rover, also called the Mars Science Laboratory, was launched in November 2011. The rover is expected to land on Mars on the night of Aug. 5 PDT. The $2.5 billion rover will touch down at Gale Crater, and is designed to search for clues that Mars could be now, or in the ancient past, a habitable planet for microbial life.
Posted by Ohm Jal at 11:32 AM No comments: 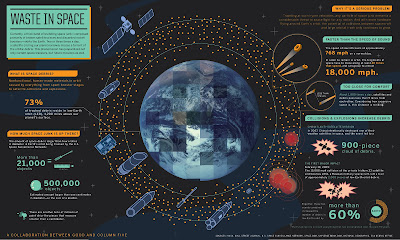 Don Kessler, the creator of the said-to-be-famous “Kessler Syndrome” theory? In the late 70s, Kessler, a now retired NASA scientist, penned a seminal paper called: “Collision Frequency of Artificial Satellites: The Creation of a Debris Belt”. In it he wrote: “As the number of artificial satellites in earth orbit increases, the probability of collisions between satellites also increases. Satellite collisions would produce orbiting fragments, each of which would increase the probability of further collisions, leading to the growth of a belt of debris around the earth. This process parallels certain theories concerning the growth of the asteroid belt. The debris flux in such an earth-orbiting belt could exceed the natural meteoroid flux, affecting future spacecraft designs.”
Kessler used a mathematical model to project the rate at which the asteroid belt he described in his paper would form, and came to the conclusion that, given the right conditions, the debris-filled belt could form as early as this century.
Now, in earth terms you’d hardly call something that passed by you with kilometres to spare a miss, but in space a couple of kilometres is what one calls a close shave. Then there’s the fact that a NASA satellite fell to earth last year, and a Russian probe dropped out of the sky this year.
But the problem isn’t so much space debris falling to earth because about 70% of the planet is water and smaller pieces of space junk invariably burn up on entry into earth’s atmosphere. The bigger pieces that do land from time to time are a bit of an issue. The real nightmare that’s keeping NASA awake at night, however, is the growing amount of space debris, and the potential for it colliding with the space station or an intergalactic private craft taking tourists into outer space.
A US non-profit science policy outfit, the National Research Council called on NASA to develop a formal strategy for tracking space junk, and to look at removing debris.
Read more here
Posted by Ohm Jal at 2:36 AM 2 comments:

Are you Thinking of hiring a maid service? You'll want to ask quite a few questions of any cleaning service you are considering in order helping you decide which company is the best fit for your needs and expectations.  Maid to Please is offering reliable house cleaning / maid service in Maid Service Bethesda MD since 1997. Bethesda is one of the most affluent and highly educated communities in the country, placing first in Forbes list of America's most educated small towns.

What should you expect from a professional house cleaning? It's important to understand that every cleaning service will perform your house cleaning a little differently. Maid to Please is one of the most sought-after maid services in the area whose impeccable standards and professional staff has earned us top ratings from Angie's List, Washington Consumers Checkbook and many more.  The firm’s goal is to provide high quality and affordable cleaning services.  Maid to Please provides you with an instant quote so you’ll know how much it is going to cost you to get your place looking like new?
Posted by Ohm Jal at 4:54 AM 4 comments: